The 2018 March for Life was an historic and beautiful day.

President Trump and Vice President Pence addressed Marchers from a satellite rally in the White House Rose Garden. We also heard from Speaker of the House Paul Ryan, and many cultural leaders and pro-life generation speakers who shared their personal stories about our 2018 March for Life theme “love saves lives.”

And we marched! Over one hundred thousand strong marched through the streets of D.C. to the Capitol and United States Supreme Court to ask for protections for the unborn and to peacefully protest the human rights abuse of abortion. 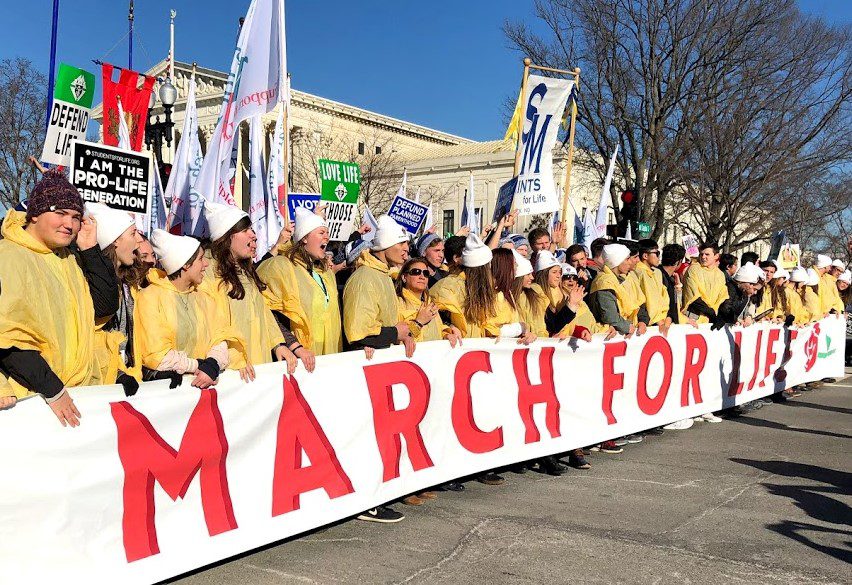 The Supreme Court is where the March for Life began.

Forty-five years ago  — on January 22nd, 1973 — seven men on the United States Supreme Court handed a decision to our country that would forever change history with Roe v. Wade and the expansion of abortion to all 50 states.

The March for Life began the following year, with a small group of concerned citizens, led by Nellie Gray, organizing a march in Washington, D.C. to to give witness to the unjust decision and to proclaim the truth that love saves lives.

Tragically, over the past 45 years, abortion has claimed the lives of over 60 million Americans.

This is “why we march.” Watch the video we showed at the 45th annual March for Life on Friday –>>

We march for life-saving love. We march to end abortion – and we will.

The 2018 March for Life may be over, but our work for the year is just beginning.

Thank you for being part of this historic movement to end the human rights abuse of abortion.

The crowds that made up the March for Life in January 2017 truly surprised me as a newcomer. I’m not sure what I was expecting, but whatever I had in my head, the reality proved far, far better.

I had heard about the March for Life since I was in middle school. It seemed like a nice thing nice people did, but I never participated. On the rare occasions it was covered in the news I consumed, it was the same old, same old story. I never really imagined myself in the crowd, although I am and always have been pro-life.  Yet in 2017, a series of events in my life led me to book a train ticket, bundle up, and see for myself. There will never be enough words to express how thankful I am that I did.

The reality is that the recycled stock photos and reworked copy that circle the news rooms of our country, then come flying at us as “the latest” could never tell the true story of this March. The broad brush with which society tries to paint “pro-lifers” turned out to be nothing more than a fabrication, and a boring, trivial one at that compared to the vibrant, inspiring reality. Here is a brief account of what I experienced, much of it to my surprise. One of the first things that I noticed was that these crowds were certainly not just women, nor were they simply “men, women, and children.” I met and shared a great 8 or so hours with thousands of individuals representing most, if not all, of our 50 States.  Quite frankly, I lost track around the 20th state someone mentioned they were from, as I attempted to get a grasp on the significance of all those people traveling all those miles without any recognition or reimbursement. I live just an hour from the Mall, but some people took buses through the night or, in some cases, for days, while others rode their Harleys, and quite a few that I talked to even flew.

This truly eclectic group was comprised of Washingtonians, immigrants from around the world, and extended families who traveled from multiple places to meet on the Mall and celebrate life together. In the crowd there were new parents, expectant mothers, and grieving parents. Biological fathers who were not allowed a say in the abortion of their children held heart-wrenching signs, quietly sharing their stories that society overwhelmingly silences, and one particularly memorable group of adoptive fathers was constantly engaged in rounding up a gaggle of the young kids they chose to love and parent. Grandparents, great-grandparents and lifelong friends stood together united in love and hope for all the generations represented.

Several in the crowds – as well as one of the speakers – spoke in one or more of the five languages I could understand, which was thrilling to hear. Countless others created a beautiful chorus of languages around me that I couldn’t even place. Some wore boots and others went barefoot – yes, barefoot in January! – but we all marched in the same direction, our different words conveying the same meaning. There were tattooed bikers and vanity-glasses wearing hipsters alongside soccer moms pushing strollers. Teachers, politicians, business owners, entrepreneurs, and artists bumped into me (or perhaps vice versa in some cases – it really was packed), and we briefly got to know one another. Several wheelchairs made their way through the crowds.  At least one of the individuals seated in them was recommended to be aborted about two decades ago to parents who clearly were fearless, dedicated, and full of love and compassion. They were also right: he was a blessing, a joy to be around, a benefit to society in spite of – and, I would even venture, because of – his disability.

Strangers protected children who got separated from their parents as if they were their own until the families could be reunited. There were plenty of teens and young adults representing their schools, sports teams, marching bands, choirs, youth groups and other organizations. Some of them were just goofy, maybe a bit sheepish or a bit of a showoff as they seek out their social footing among their peers, but who reminded those of us who have been in “the real world” for quite some time that life is a funny, beautiful, unpredictable thing – and that we can often value it even more in retrospect, given the chance. More importantly, they reminded us that every voice counts no matter the age of the speaker. We’re all in this together.

I watched a teenager pick up fallen cash and return it to the owner, a stranger whom the teen treated like a friend. I met people of various faiths and had some really fantastic conversations as I walked alongside clergymen who devote their lives to promoting beliefs that, quite frankly, I don’t share in the least. I met people who claim to have no religious affiliation or personal faith and they were not at all offended by my Christian views. In other words, I met the real people of my country and my world, not their carefully-edited, painfully narrow, and utterly fallacious stereotypes.

When I offered to help a woman struggling with her rolling bags, I met one of the most incredible and resilient human beings I think I may ever have the privilege to meet in this lifetime. (Diane B., if this ever happens to get to you in the unpredictable world of social media and cyberspace, please know I will be keeping you, your family, and the dreams you seem destined to achieve in my prayers!) I also hugged our Lyft driver who had never really considered identifying as either pro-choice or pro-life. His story spells it out though: not only did he raise five of his own children and step-children, he and his wife took in two very young extended family members and raised them as their own – helping the younger of the two through crucial developmental stages after he had suffered repeated traumatic events from infancy. He had also been a foster parent and is considering adoption as his own children are growing a bit older. The truth is, it would be effortless to double, if not triple this already lengthy account with all of the amazing things I saw, heard, felt, and shared as part of this experience. But there’s really no need to go on when the sum of all of the magnificent parts of the 2017 March for Life was the profound respect for the sanctity of life – ALL human life. This was presented in the opening addresses and repeated all throughout the event. Yes, there is a special focus on the unborn at this march, but I challenge everyone not to stop listening there. We certainly didn’t, nor do we, nor will we.

The March for Life 2018 is right around the corner. I can’t encourage you enough to come, and hope to bump into you there.

>>>> WATCH as this message is proclaimed in our 2018 March for Life “Love Saves Lives” promo video!

As I shared in a recent article for Focus on the Family, “We’ve been at this for quite a while – this year will mark the 45th annual March for Life. Our event is peaceful and nonviolent. Love is our mission. We work to end abortion; we seek a time when abortion is unthinkable.”

Will you be the voice for the unborn child that has no voice? For the expectant mother who needs love and support?

Join pro-life America at the 2018 March for Life on Friday, January 19th.

Even if you cannot attend, we still need your voice to share our message. Let your friends, family, and the world know #WhyWeMarch.

See you in one week!

The March for Life is an incredible opportunity to share the truth about life and communicate the inherent dignity of the human person.

If you’re looking for inspiration for signage to bring, check out a few of our favorites from the 2017 March for Life!

We also encourage you to think creatively about loving and truthful messages to share #WhyWeMarch.

(p.s. if you aren’t able to bring homemade signage, many groups provide free signs at the rally.) Shared with permission by the March for Life.

When my mother was pregnant with me, she thought she had miscarried several times. Upon running some prenatal diagnostic tests, her doctor revealed that I had a high likelihood of being born with a chromosomal disorder, such as Down Syndrome.

Delivery itself, the doctor cautioned my mom, could kill her. Why risk leaving 2 healthy kids motherless? Why cause her husband this pain…for a defect like me? Abortion was clearly the only “smart choice.”

My mom named me Faith because she chose life. She recognized my inherent dignity. She trusted God had a plan for me, regardless of my abilities or disabilities. And thank God she did. 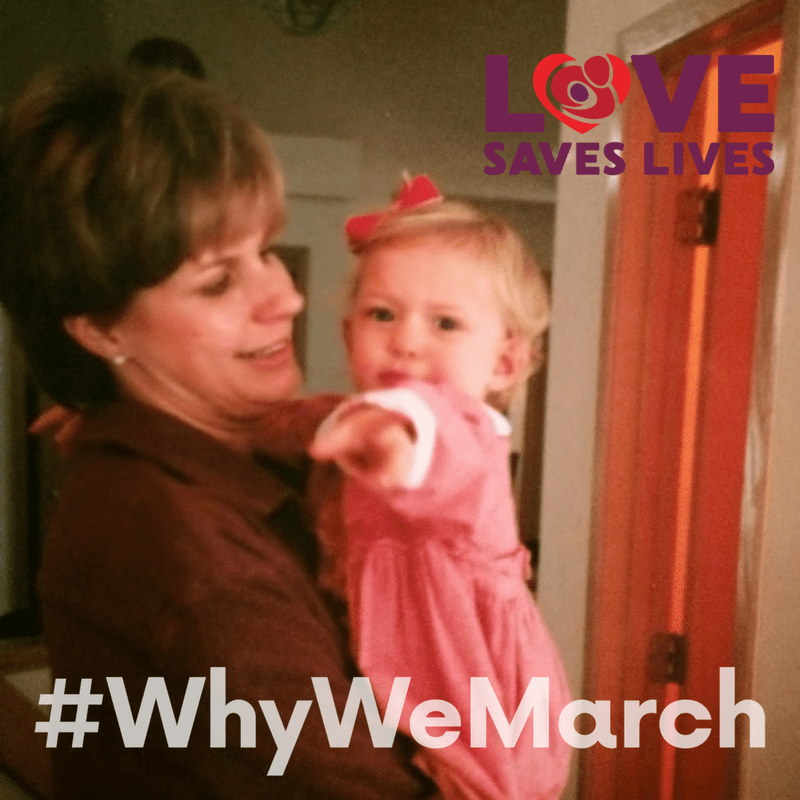 The pro-life movement is a chance to reflect on that “what if.” What if I weren’t here? What if YOU weren’t here? I can’t help but think about the countless people I could’ve known, but don’t–and how close I was to joining their ranks. I’m glad to be here. I’m glad to have been the exception.