Watch the 2021 California March for Life

The Rally will be at the California State Capitol: South Steps of the Capitol close to N Street. Directly following the Rally we will begin the March for Life around the Capitol Complex. 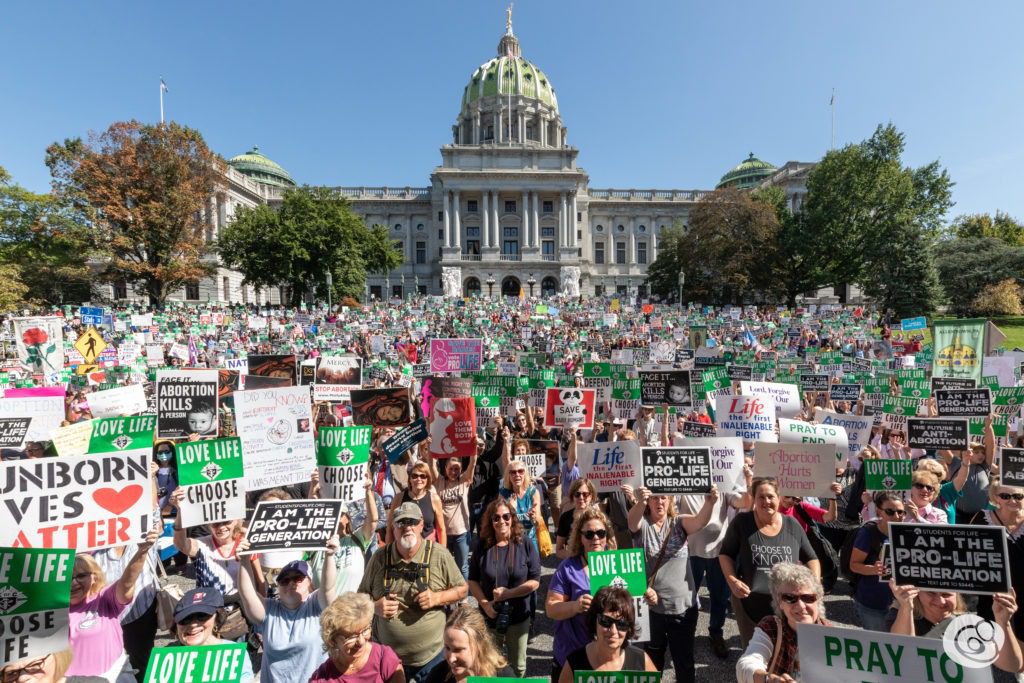 Across the span of one month and two coasts, we hosted three incredible State Marches for Life in California, Virginia, and Pennsylvania—and our State March program is just getting started! […] A Look at the California March for Life

Last week, we hosted our first-ever official California March for Life. What an incredible day it was! We are overjoyed by the enthusiasm and support of life that we encountered […] The California March for Life – being held on Wednesday, August 25, 2020 in Sacramento, CA – will be the biggest pro-life advocacy event in our state’s history! We are focusing on making a statement in support of life which will be heard loud and clear by our legislators. Our message of love for the unborn children and their mothers will be heard by every member of the legislature as they come to Sacramento that Wednesday for one of their session days.

What is the Schedule of Events

We expect the march around the capitol grounds to take approximately 30 minutes.

Where is the Rally

The Rally will be at the California State Capitol: South Steps of the Capitol close to N Street.

Who will Speak at the Rally

Invitations have been sent out to the invited guests for our Rally. Nationally known figures will be in attendance. We will update this page and the website as they are confirmed.

Jeanne Mancini, President of the March for Life

What is the March Route

The March Route will encircle the Capitol Complex. The length of the March Route is approximately 1 mile. Here is a link to a map.

No. The 2021 California March for Life is a public event which is open to all pro-life people. While registration is not required, it is encouraged. You can sign up HERE for updates to be delivered to your email.

Will Signs be Provided

We encourage you to be creative and bring your own signs! It is likely that many groups will have signs available as will. You can find additional sign ideas HERE.

Can I Find a Bus from my Area

There are many groups from across California who are bringing buses to this event. Please check with your local pro-life group to find out if they are bringing one. If not, consider organizing a bus to help the many others who want to come!

We will be adding bus information to this page as they are scheduled. Check back to find out if a bus is coming to Sacramento from your area.

If you have a bus coming which you would like to be listed, please fill out this form to share that information with us.

Where Will the Bus Drop People Off

On 10th Street on the west side of the Capitol between L Street and N Street.

Where Can Buses Park the Day of the Event

A bus parking area is located on 15th Street, between L and N Streets, on the west side. This area has a 3-hour maximum parking time limit.

Can My Bus Reserve a Spot

No, but you can find other bus parking options here.

Is There Overflow Parking

Here is a map of parking lots near the Capitol.

What if I'm Driving Myself

You can find parking on the streets around the capitol or use one of parking lots found on this map.

Where Can I Use the Restroom During the March

There will be portable bathrooms available for those attending.

How Can I Get to the Rally from the Parking Lot

That depends on what parking lot you use. But the Rally will be held on the south steps of the Capitol near the intersection of N Street and 11th Street.

What Else is Happening for the CA March for Life

You can go into the capitol before or after the event to visit legislative offices. Please call them ahead of time, because some offices are not taking in person meetings because of COVID-19 concerns. You can find your California State Legislators here: http://findyourrep.legislature.ca.gov/

Together, we CAN MAKE A DIFFERENCE

Here are a few ways you can help out.

Promote this event on social media and in your community by using the hashtags #WhyWeMarch and #camarchforlife.

Becoming a participating organization by filling out this form and submitting it to this email address.

Donate to support the California March for Life.

Volunteer at the California March for Life.

If you have a specific question, contact the California March for Life.

Jeanne Mancini was appointed to the role of President of the March for Life Education and Defense Fund in the fall of 2012. In this capacity she proudly directs the small non-profit organization committed to restoring a culture of life in the United States, most notably through the annual March for Life in Washington, D.C., held on the anniversary of Roe v. Wade.

Previously Jeanne worked with the Family Research Council (FRC), where she focused on issues related to the inherent dignity of the human person, including abortion, women’s health, and end-of-life issues. Prior to FRC Jeanne worked for the U.S. Department of Health and Human Services in the Office of the Secretary. Her federal government experience includes global health policy, as well as domestic and international health care issues. Before working in public policy, Jeanne worked for the Catholic Church in a variety of positions involving educating on life issues, human sexuality, marriage, and family.

Jeanne has made frequent media appearances including interviews on MSNBC, CNN, FOX, ABC, CBS, and others. Jeanne’s writings have appeared in The New York Times, U.S. News and World Report, USA Today, the Washington Post and numerous others publications.

Jeanne holds an undergraduate degree in psychology from James Madison University and a Master’s degree in the theology of marriage and family from the Pope John Paul II Institute for Studies on Marriage and Family. Jeanne resides in northern Virginia with her husband, David.

See below for press photos of Jeanne Mancini. As an avid constitutionalist, Brian cares deeply about freedom and liberty. Driven by his commitment to improving the quality of life in his community, Brian first found his passion for public service as a Santee City Council Member from 2002-2010 and then again from 2017-2018.

In 2020, Brian was appointed to the California Commission on Disabilities and Access. Brian proudly serves as the Vice-Chair of three Senate Committees: Human Services; Insurance; and Natural Resources and Water. He also sits on the Senate Appropriations Committee, the Senate Governmental Organization Committee, and the Senate Business, Professions, and Economic Development Committee.

Greg Fairrington is the lead and founding pastor at Destiny Church in Rocklin, California. It is only by God’s faithful plan that he has pastored a church that started as a small group of people 31 years ago and is now one of the fastest-growing churches in Sacramento.

Greg made national news this last year when he made the courageous decision to keep the doors of the Church open in defiance of the COVID-19 shutdown. His mantra has been “the presence of God changes everything” – and it has at Destiny Church.

Allison Martinez is the new Executive Director of the California Alliance of Pregnancy Care. A longtime resident of California, she has a heart for serving and is a strong supporter of life. Her passion for justice expresses itself through care for women in crisis, struggling families, and youth in foster care. Through her community service, Allison expresses her desire to bring the hope and healing of Jesus into families and be a voice to those who have none. She is privileged to partner with CAPC to unite and strengthen pregnancy resource centers and clinics across California.

Rachel Storment is the Creative Arts Pastor at Destiny Christian Church. She has been leading worship for over 13 years and is passionate about seeing people encounter the Love and Grace of God through music. Rachel graduated Magna Cum Laude with a B.A. in music from William Jessup University in 2012 and is an ordained minister with the Assemblies of God. In 2014 Rachel founded “Destiny Performing Arts,” a free after-school creative arts program for students in 1-12th grade. She has been married to her husband, Zach for almost 8 years, and they have two beautiful daughters. In her spare time, Rachel enjoys writing, reading, and pouring into the next generation.

Lea Kalinowski grew up in Vacaville, California, and graduated from the University of Mary after studying Psychology.

She became involved with the pro-life movement when she was young, attending the Walks for Life in San Francisco and praying outside of abortion facilities. Additionally, she helped start The Gabriel Project at St. Mary’s Catholic Church, and began training in the field of counseling at Alpha Pregnancy Center in Vacaville.

While at college, Lea was involved with the campus pro-life group,Collegians for Life, and assisted at a pro-life speaking event in Bismarck, North Dakota.

Lea currently resides in Vacaville, California, and serves the Pro-Life Generation as Students for Life’s Northern California Regional Coordinator. This work includes helping students in northern California and Nevada in the mission of promoting life.

Senator Grove was born and raised in Kern County.

After graduating from high school, Senator Grove served in the United States Army. While stationed in Frankfurt, Germany she witnessed the fall of the Berlin Wall in 1989.

Following her service to our nation, she established a staffing company with her sister-in-law called Continental Labor and Staffing Resources. Senator Grove currently serves as the CEO.

Prior to her election to the State Senate, Senator Grove was the first woman veteran elected to the California Legislature as she served the 34th Assembly District from 2010 to 2016.

Senator Grove was elected to represent the 16th Senate District in November 2018, which includes portions of Kern, Tulare, and San Bernardino counties. In January 2019, she was elected Leader of the Senate Republican Caucus where she served in that capacity for two years. As the Republican Leader-Emeritus, Grove remains a committed representative working with legislators to advance policies that benefit the constituents, businesses, and communities within Senate District 16.

Senator Grove is an advocate for small business, school choice, the developmentally disabled, farmers, and families. She currently lives in Kern County with her husband, Rick. They are the proud parents of five children and eight grandchildren.

James Gallagher has represented California’s Third Assembly District since 2014. Before joining the Assembly, he served on the Sutter County Board of Supervisors for six years. James earned his Bachelor of Arts degree at UC Berkeley before completing an Assembly Fellowship in Sacramento and a law degree at UC Davis, where he graduated at the top of his class. He advocates for small businesses and farmers in his law practice and is a partner in his family’s farming operation. James is married to his high school sweetheart, Janna; the two live in Sutter County where they are raising their five young children.