Check out the March for Life on Flickr for pictures.

Here’s a list of print and online media pieces about the 2014 March for Life.

Thank you for your prayers and support for the 2014 March for Life!  As you probably heard, a snowstorm hit Washington, D.C. the day before the March, bringing 4 inches of snow (the most snow the city has seen in 3 years!) and bitter temperatures.  Despite the freezing cold, our Nation’s Capital was filled with an upbeat and positive crowd for the rally and March!  The tens of thousands of people who braved the bitter cold to speak out for life are truly a testament to the beauty and passion of our cause.

We are excited to report that this dedication of a courageous, loving, diverse and mostly youthful, gathering of Americans did not go unnoticed.  We want to share with you the vast media coverage of the 41st March for Life.  Both Fox and CNN provided significant coverage of the March for Life, with Jake Tapper of The Lead on CNN walking the final quarter mile of the march in person with me for an interview.  We also want to share a clip of the Kelly File on Fox News with you, as the comments of Filmmaker Dennis Michael Lynch are truly telling of the March.  He himself even admits, “I learned so much just from listening to the speeches!” 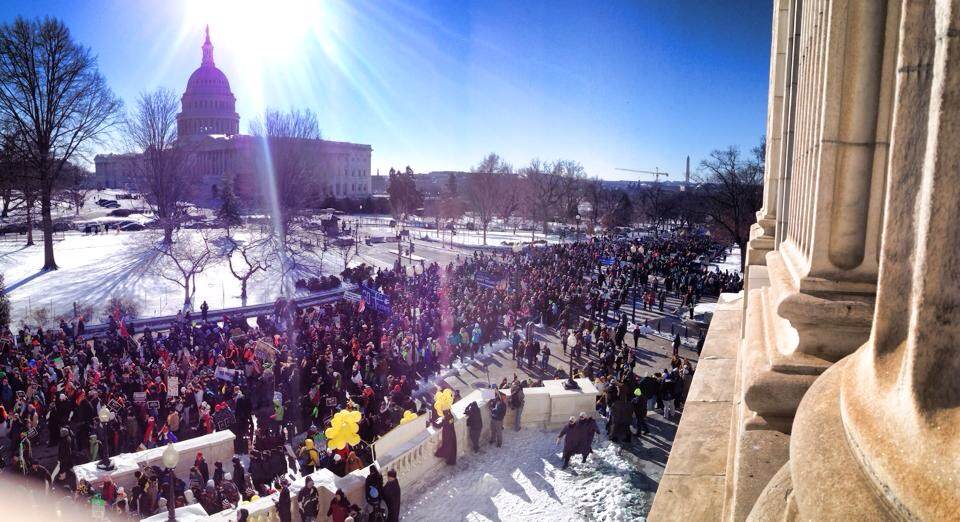 We have a list of the online and print media about the March for Life, and the clips of all TV coverage will be available shortly.  We also want to share with you a summary of the social media activity from the March for Life.  For those of you who are social media-savvy, you’ll know that the fact that our hashtags #MarchforLife and #WhyWeMarch we’re “trending” nationwide is significant in that they were a top subject of discussion on Twitter for the entire country!  The “WhyWeMarch” subject allowed marchers and supporters nationwide to get to the heart of the March and proclaim “we march for a culture of life and to remember the 56 million unborn lives that have been lost because of abortion.”   Check out this album of pictures of “WhyWeMarch” photo submissions.

As you know our rally featured speakers on the topic of “Adoption: A Noble Decision.”  We were pleased to have Dr. James Dobson and his son Ryan Dobson of FamilyTalk Radio, as well as the Homecoming Queen at Auburn University, Molly Anne Dutton, tell their adoption stories.  Additionally, Ryan Bomberger of the Radiance Foundation gave the keynote address at our annual Rose Dinner with a powerful and personal story of adoption and purpose.  While the 2014 March for Life is over, our work at the March for Life Education and Defense Fund for the year has just begun.  We have educational and advocacy initiatives planned, so stay tuned for updates.  You can also download our mobile app for Android and iPhone devices as a resource for the entire year as we “march on” for life, or visit the Take Action section of our website.

If you have stories, videos, or pictures of the March for Life, we’d love to see and hear them!  You can always share them on Twitter, Facebook, or Instagram or email us at info@marchforlife.org.  I want to close with a few quotes from young Marchers who shared their experiences on Instagram.  One young woman wrote “The 18 hour bus ride wasn’t awesome, but at a stop along the way, a young pregnant woman told a few of us she was going to cancel her appointment at Planned Parenthood after seeing all of us.  God is so good! #WhyWeMarch #MiraclesHappen.”  Another young woman wrote “Yesterday was inspiring and humbling.  We survived Roe v. Wade but it will not survive us.”  We greatly appreciate you joining with us in turning this passion and momentum into action for life.

To support the March for Life, as well as our year-long activities, click HERE.